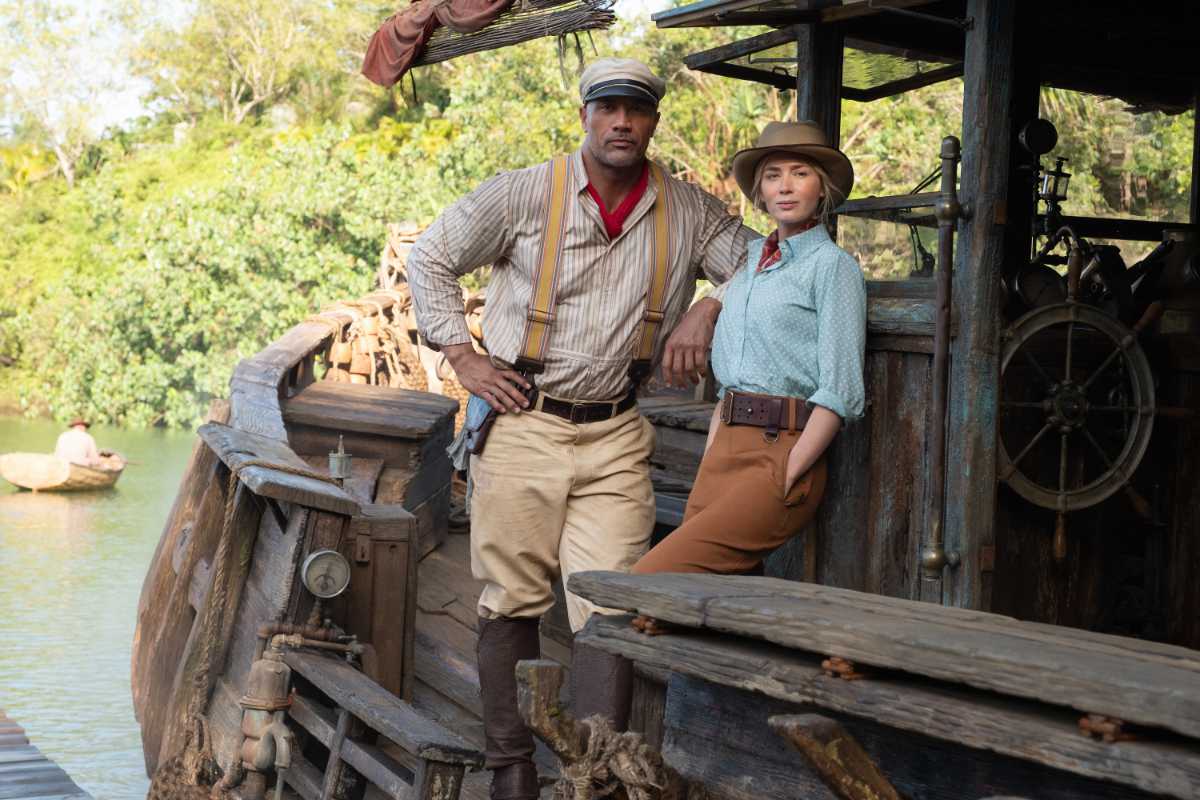 Earlier this week, Vital Thrills attended the Jungle Cruise film press conference with Dwayne Johnson, Emily Blunt, Jack Whitehall and Edgar Ramirez. Read on to find out what they had to say about the Disney movie based on the theme park ride.

Lily travels from London, England to the Amazon jungle and enlists the dubious services of Frank to guide her downstream on La Quila, his ramshackle but charming boat.

Lily is determined to discover an ancient tree with unparalleled healing abilities – possessing the power to change the future of medicine.

Pushed together on this epic quest, the unlikely duo encounter countless dangers and supernatural forces, all hidden within the deceptive beauty of the lush rainforest.

But as the secrets of the Lost Tree unfold, the stakes get even higher for Lily and Frank, and their fates – and those of humanity – hang in the balance.

Blunt told us she kind of “ghosted” Johnson early in the casting process. Johnson said, “So our director, Jaume Collet-Serra, was flying out to New York to meet, uh, Emily to hand-deliver the script for Jungle Cruise.” He said that along with the script, there was a video that Johnson recorded for her that said, “Emily, you’re the only one who can make this movie.”

Blunt explained that “as a Brit,” which she asked Whitehall to attest to, “If someone gets too loud… tone it down.” She laughed throughout the story, but said she wanted to read the script first. She added, “Loved your video.”

Of the film, Johnson said, “Well, the script was really well placed and I saw the potential of the opportunity right away. And that opportunity was to take a beloved and iconic Disney ride since 1955, when the park first opened. It was Walt Disney’s baby. There were a lot of elements that I felt comfortable saying yes, I’ll come on board, I’ll partner with you guys, and we’ll develop this stuff.

“And we brought it to a really great place. And again, to bring it back to Emily, the next step after Jaume, finding our director, was finding my co-star. The Indiana Jones woman here.

Whitehall was asked about all of his one-liners in the film, and he said, “I mean, like, after the Frozen experience of having my line cut from Frozen, I felt like it was just the case of throwing enough stuff at the wall and something that sticks…because I was just desperate not to be completely cut off from it,” he joked.

“The fact that there’s only one line is an improvement over the Frozen debacle, and I’m so excited to speak in a Disney movie.” He also said there was “a fair amount of improvisation” in Jungle Cruise. “The script was incredible, but also, we had the opportunity to improvise and add elements to it, and these two [Blunt and Johnson] created this environment where we were able to do that and it felt like such a safe space.

Ramirez plays a character who has a bit of a CGI snake, that’s all we’ll say without spoiling anything, and he said upon seeing the finished film, “I was very happy that those snakes weren’t near me for filming…because I’m super scared of snakes, and we met some of them when we were filming in Atlanta, you know.

Ramirez said it meant a lot to him to be part of the Jungle Cruise movie, saying, “To be in a movie based on the most iconic attraction in the most iconic entertainment universe in history, like Disney, is so special, and to be with these amazing people, it’s It’s incredible.”

Of the hardest thing to film, Blunt said it was the swing. “For me, that was the most difficult because he wouldn’t let me take a direct grip. He was going – he pushed so far every time to try to get me to laugh on that vine swing. We shot that all day. We didn’t get one right away.

Johnson added, “It was that heroic vine swing that you think you know where-where the-where the-the hero catches the lady. You know, with that intention… and take off and go save the day. And then, of course, it just goes to hell because I don’t save the day.

Blunt also said she felt closer to her Jungle Cruise movie character Lily than her previous Mary Poppins role because, “I feel like Lily is a little messier. Like, Poppins is so picked up and perfected, and I don’t feel like I’m going through life that way.

If you’ve read the news, you might be familiar with the scene where Whitehall’s character involves his sexuality. Whitehall said: “I think it was a scene that we really wanted to do well…I think what’s so great about this movie is that all of the characters feel so fleshed out, and all of them have interesting backstories. and are fully realized. And, in a lot of movies like that sometimes you’d have kind of two-dimensional characters. But… I think it’s so great that we understand so much about each of these characters, and they all have reasons to be where they are, and interesting, textured stories.

What do you think of what the cast had to say at the press conference? Let us know in the comments or tweet us @vitalthrillscom.