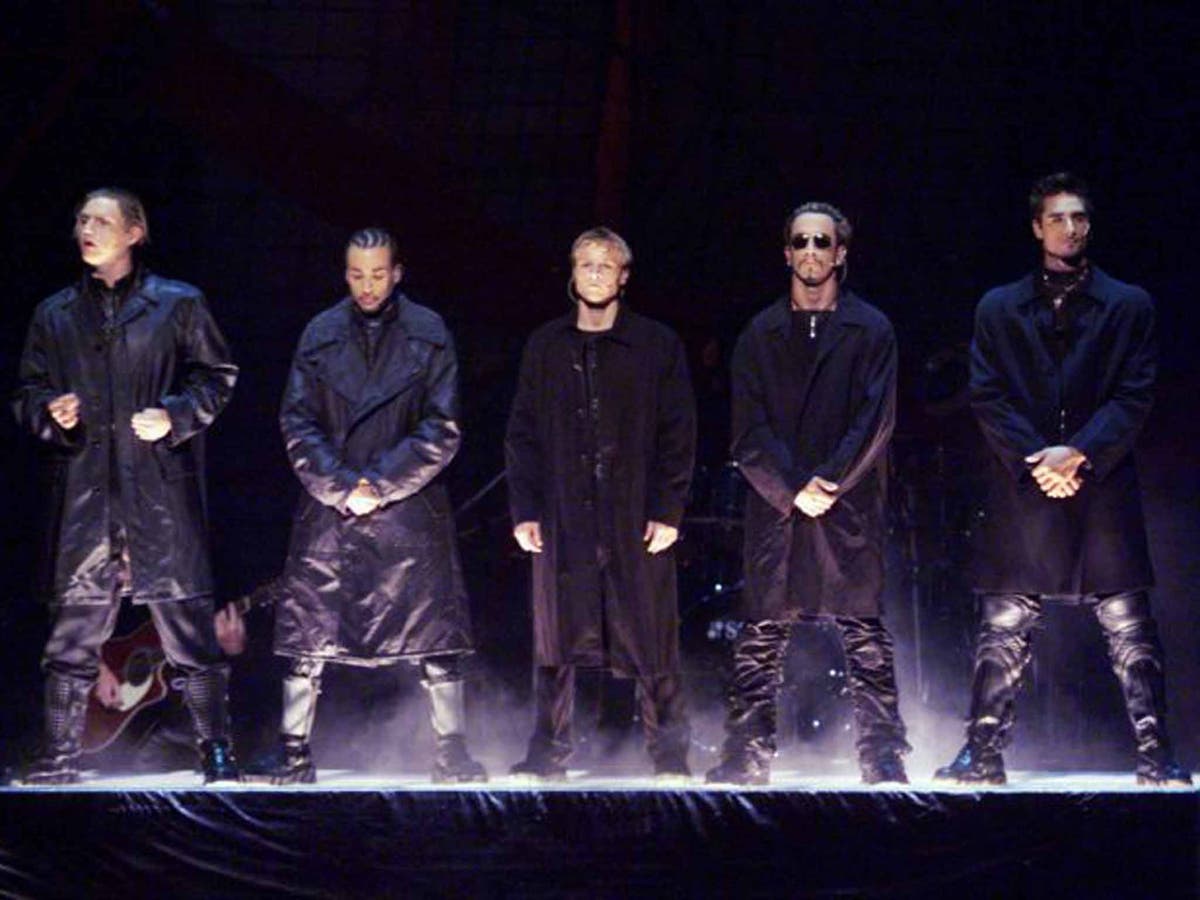 Since their first single 20 years ago, the Backstreet Boys – AJ McLean, Howie Dorough, Nick Carter, Kevin Richardson and Brian Littrell – have recorded a dozen albums and have sold over 130 million albums worldwide. They filled amphitheatres, broke records and danced topless in fake rain. Now, in the middle of their 20th anniversary world tour, BSB is heading to the big screen with their documentary Backstreet Boys: Show ‘Em What You’re Made Of.

Which is not to say that the Backstreet Boys are old, just … mature, almost the antithesis of the hairstyled and tattooed teens of today, the One Directions and Justin Biebers who are themselves the pink slime of the boy bands of the pass.

Gone are the colorful ski goggles, misguided hats and oversized hockey jerseys of yesteryear BSB, replaced by wise button-down shirts and a little less misguided haberdashery. In a scene filmed in the London home where the band wrote “In a world like this,” Littrell carefully brings Carter a hot cup of tea. Later, he wears an apron while preparing breakfast for the group. During a rehearsal, Richardson takes to the piano wearing – panting – cargo shorts.

“We were trying to go to this [movie] from a raw, uncensored perspective, “Richardson tells me.” We weren’t trying to make a fluffy promotional piece. “

Quite surprisingly, they succeeded. While BSB’s early fame is undeniable – cut to images of girls fainting at concerts in crowded stadiums – Show ‘Em What You’re Made Of is as much about the band’s inevitable downfall as their former domination.

After the smashing success of Millennium in 1999 (the singles include “I Want it That Way” and “Larger Than Life”), BSB released Black and Blue in 2000 (the singles include the underrated criminal “The Call”), a compilation album in 2001 and Never Gone in 2005. Then a fight over McLean’s drug addiction led to a rift between him and Richardson. In 2006, Richardson announced he was leaving the group.

McLean, Dorough, Littrell and Carter released two albums and toured three times as a quartet, but BSB was not the same, and would not be until Richardson joined again in 2012. (McLean and Carter thank Richardson for helping them recover from drug problems, and throughout the film and our interview he comes across as the band’s voice of reason.)

“If you want to make a real documentary you have to ignore the cameras,” McLean says when I ask if the guys have discussed how much BSB reality they would share on screen. “We’ve been spreading our dirty laundry for the past 22 years, from my rehab to Brian’s surgery. [Littrell had open-heart surgery in 1998], but there’s a lot our fans don’t know. ”Carter adds,“ We ​​wanted to give our fans a different side of us that they’ve never seen before. ”

Part of this side is hard to watch if you are a fan. In addition to McLean’s struggle with drug addiction, the documentary discusses Carter’s struggle with drug addiction and his estrangement from his parents, as well as the group’s fraud and theft lawsuits against the founder / director of BSB – and later the creator of * NSync – Lou Pearlman (who ultimately faces conviction for perpetrating a $ 300 million Ponzi scheme). In the middle of the film, an argument about Littrell’s ability to perform at concerts – he has what he calls “vocal tension dysphonia,” which tightens the muscles around the vocal cords – is aired. Cue Carter and Littrell shouting, “Shut up” to each other across a conference room.

But there is also lightness. At the start of the documentary, the guys mull over a high school performance as they were almost booed from the stage after their PA exploded (with Glee-worthy poise, they recover by singing a cappella). And in a later scene, they enter a ballet class at Carter’s old school of dance, where the assembled teenage girls prove too young to know the “Thriller” choreography of “Everybody (Backstreet’s Back)”.

In a way, the Backstreet Boys quietly blended into this great night of pop culture. Of course, McLean and Carter struggled with addiction, but there was no major BSB fire, and the reassembled group could have possibly lived on royalties and cameos until their pensions kicked in. The fact that the band still bother to perform is impressive. That they record new music seems almost inconceivable. “Why don’t you just hang up?” ” I want to ask. “Either of you could do Broadway. Surely there is a BSB opportunity in reality TV.”

Show ‘Em What You’re Made Of answers these questions for me. The Backstreet Boys are determined to remain a band, to continue playing and recording, to remain – indefinitely – “the boys”. “We don’t have a recording contract,” Carter says, laughing into the camera at the start of the film. “It’s awesome. It’s like starting all over again.” Backstreet is back, okay.